The Value of Contemporary Art

Poeple often ask me if I know this or this artist they are aquainted with. Well, to be very honnest I'm not very interrested. Not because I'm selfish or pretentious, but because looking at other artists alledgedly wonderful has always been a disapointment. And I always wondered why. Why no other artist alive today, save Françoise André (1926-2009†), has ever caught my attention?
Why all what they do is not bad but is not good either?
This is because Françoise André and me, we always thought and painted the way the ancien masters did 200 years ago. We have yet to meet a third person doing it like we do.

Indeed, it all started 200 years ago, with the advent of the modern world. The popular image of the Ancient Regime (before the French Revolution and the American Independance) is of an autocratic monarchy helped with the overwhelming power of the Roman Catholic Church. Then science and progress freeing all that up.

As far as Art is concerned it's quiet the opposite which happened. Until the end of the 18th century, art and its patronage was a private thing, something depending on personal taste. Of course there was always an Official Art and an Academy but it's us today who consider as null what wasn't recognized by the ancestors of our institutions. It's us who say that art was ruled by bureaucracy because it's precisely the only situation that we have ever known in our society. Poeple at that time didn't see it like this. In reality official art was non existant, the notion of official art wasn't even thinkable. Art was always the fruit of a personal decision. What we call today the official academism of the 18th century was just the taste of certain persons, perhaps a certain fashion. Poeple would naturaly buy the artworks they like and artists didn't have to have a name to barely survive and didn't depend on governement wellfare.

Today the situation is exactely inverse: Art exists only and exclusively through institutions, forcibly politized, with no room at all for the personal taste of the poeple inside these institutions, let alone outside. The poeple working for these institutions and making the decisions are not those who provide the funds, and their job is basicaly to perpetuate the official line of the contemporary art.

Art is no longer a matter of taste, it only has to look like something wellknown. That's why art is moreless the same today as half a century ago. Poeple don't realize that 50 years ago we were in 1960 and that everything we know today already existed. The debauche of video and giant screens doesn't change much about it. And even this is about to be getting old.

Art hasn't suffered from the outrageous industrialization of our means of production. Not because of that. The 19th was also the century of nationalism and of the political class. It presided on the creation of monstruosities like the Academy of Art (and other schools of art which will follow), the Salon and other official exhibition places, the National Galleries and Art Museums, later renamed Contemporary Art Nuseums and Cultural Centers. Today we reached the summum of horror with the Bienals and giant art malls outside of which not only artists but galleries are irrelevant All these things destroyed art more than it helped it.

At that time the idea of allowing the public to see art, as if it owned it, may have seemed a good idea but it quickely turned sour. The impressionists were the first to struggle against the plutocratic and tentacular system and almost all generations of artists after them. All the great names of art dealers and art creators have been built thanks to the individual and private patrons, and not thanks to but in spite of the socialo-national governemental or semi-governemental institutions.

They are, today, institutions of death since they only show dead artists or artists doing like the dead ones in a coffin of concrete.

THE CAUSE AND CONSEQUENCE OF THIS

This has nothing to do with modernity or new technologies or photography or telecommunication and things like that. A lot of wonderful creations have been done long after photography was invented and railways crossed the land from East to West. In fact science and technology do help artistic creation.

It all has to do with the loss of real interrest of the elite for the arts and a slow transfer of the role of sponsor from the wealthy poeple to the national administration. And the slow transfer of choice from personal taste to professional expertise.

Art buyers fear they could lose money if they don't follow the advice from a expert in contemporary art. They want to invest in safe values. Well, now they can be certain that they will lose all of their money.

Art collectors 100 years ago were more astute and knew to never rely on a third person who would inevitably take a hefty commission. They chose by themselves and they were educated enough to know that if they liked something it had to be good and valuable. They were the poeple who bought the first Manet, Cezane, Picasso and Modigliani.

Today I can't tell of a single art collector or a realy private gallery who has discovered a big talent in the last 50 years. All the artists have been propped by institutions and they aren't worth much.

All the money invested in contemporary art since 1960 will be lost. It has already been lost to a great extent but more losses are coming. It's so worthless that the cost of constantly re-advertising these works through retrospectives, publications, museum maintenance, insurance and so on - and this in several countries simultaneousely-, far exceed their actual value. And I don't count promoting newer artists who do something similar so that crap is not replaced by something better.

They are worthless not because of their shrinking sale price public auction after public auction, but because they are empty of content. Art critics can write what they want, the facts are there: They are ugly and their realisation took to the so called artist a question of minutes, at best a few hours. Not even one day. If you want I can do for you ten white-on-white or blue-on-blue or green-on-green for a small fee. Or something more complex or more cubic if minimalism is not your cup of tea. What's the point, seriousely?
They are void of any talent, of any phylosophical message, of any beauty, of any thing.

Take by contrast the Gioconda from Leonardo Da Vinci, a painting which not only took months (at that time it was normal) but which is amazing at any level of reading and continue to stun art historians even after being the most studied work of art ever. 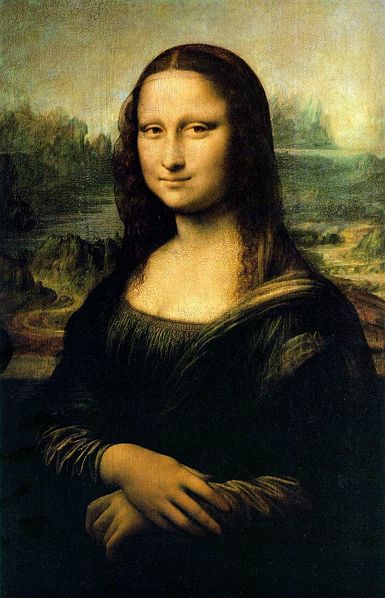